Humberto Arenal, an intellectual of word 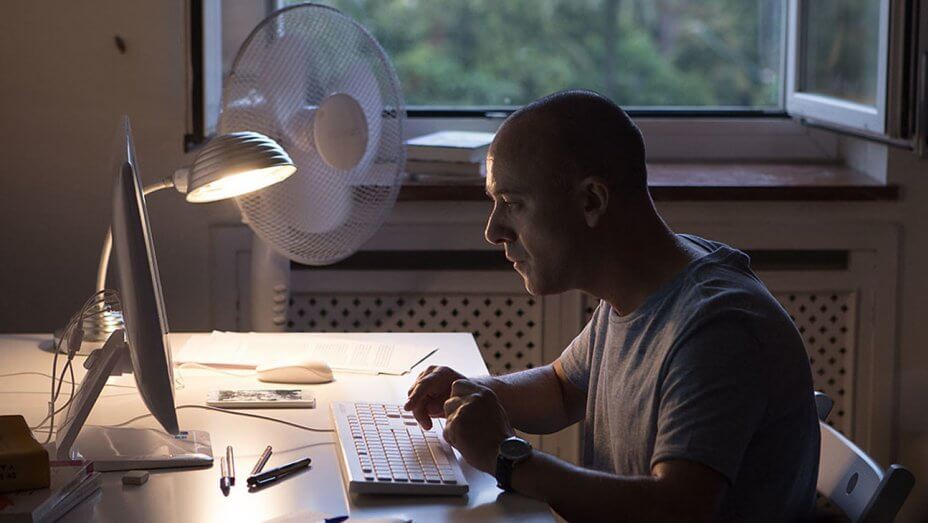 A high-risk shot at a screen adaptation of a novel within a novel, The Motive is entertaining and buzzes with fun ideas, but as an involving drama, it never gets past the first chapter. Manuel Martin Cuenca’s films have mainly been about weirdo outsiders living in an offbeat, slightly alien world that’s all the Spanish director’s own, and in his last outing, he was able to pull off the remarkable feat of eking out a little sympathy for a cannibal. But this time, and despite a more-than-willing performance from the dependable Javier Gutierrez, such sympathy is crucially absent. Which means that The Motive is stylish, thought-provoking, clever and very watchable, but also strangely heartless and manipulative, indeed a faithful reflection of its sad-sack protagonist. But its lively spirit still make it Martin Cuenca’s most aud-friendly film to date, meaning it could well find new viewers for one of Spain’s strongest directorial talents.

The lovely, sigh-inducing credits sequence, accompanied by a song of great beauty by the Spanish singer songwriter Jose Luis Perales, makes for an intro worthy of mention. Gutierrez, best-known to non-Spanish viewers for being the bad cop in Alberto Rodriguez’s Marshlands, plays sad-eyed little fall guy Alvaro, doing a job he hates in a legal office and dreaming of writing a great novel. The problem, as Alvaro is reminded by his foul-mouthed, aggressive creative writing teacher Juan (Antonio de la Torre, the titular cannibal of Martin Cuenca’s last film), is that Alvaro’s a terrible writer.

To make matters worse, in a major departure from the Javier Cercas book on which the film is based, Alvaro is married to Amanda (Maria Leon), a best-selling novelist. There’s no explanation of how such an unlikely couple might have come together: There’s no wife in the original, and presumably she’s there to dramatize Alvaro’s ambition.

Alvaro learns that Amanda is having an affair and leaves her, and soon afterwards the last nail is driven into his mental coffin when his boss invites him to take a long vacation. He moves into an apartment and gets to work on his novel — but misreading Juan’s instructions that he “get a life” to write about, he chooses to get other people’s lives instead, basing his book on the lives of the other people living in the apartment block. (Juan suggests that Alvaro get his inspiration from life rather than from books, a nicely ironic nod when you consider the inspiration for The Motive.)

The block’s other inhabitants are the concierge (Adelfa Calvo, doing terrific work), an unhappily-married older woman with whom Alvaro ends up having a sad fling, purely as a way of gathering material for his novel; an elderly right-wing ex-soldier, Sr Montero (Rafael Tellez), who has (wink wink) a lot of cashed stashed in a safe; and a Mexican immigrant couple, Irene (Adriana Paz) and Enrique (Tenoch Huerta), whose conversations Alvaro starts to record — with surprisingly good audio quality — from his bathroom. These are the characters and situations Alvaro will use for the plot of his novel, and as they live it, he’ll watch and write it down. Sounds simple — but of course it won’t be, especially after he starts twisting events in search of a better story.

When Alvaro later becomes not only a figure of fun but an outright psychopath — happily destroying the lives of others for the sake of a novel which will will, like its author, presumably be a nasty piece of work — then the viewer is consigned to regarding him from a safe distance with a kind of appalled fascination, like a disgusting insect in a cage.

That said, The Motive is really smart stuff — cleverly structured and plotted, with moments of real wisdom on the hoary old theme of life vs. art; it's well performed, fizzing with ideas and, at times, very funny. It’s also full of wonderful visual compositions, whether we’re watching Alvaro’s naked back as he furiously types away in his all-white room, or at the lovely nocturnal shots of Seville. Scenes set in the apartments of Lola and Sr. Montero gently satirize the traditional Spanish habit of filling their homes to the bursting point with religious and family clutter. Indeed, if some of the affection in The Motive’s depiction of Seville and its people could have warmed its portrayal of its central character, then it might have been a richer film.